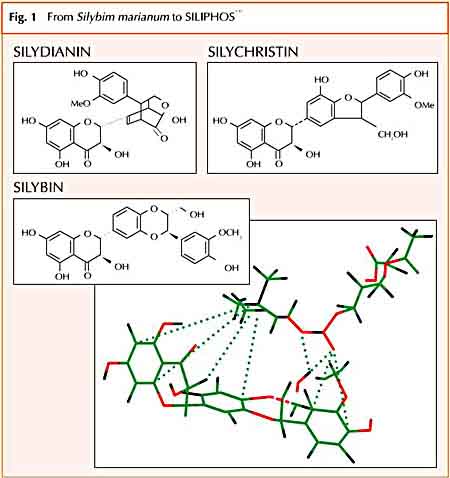 This image shows the chemical structure of the three main constituents of milk thistle extract, or silymarin. Silybin is the most plentiful (about 60% of silymarin) and it is also considered the most active/helpful. As part of the Phytosome process silybin is isolated from the other two for greatest effectiveness. 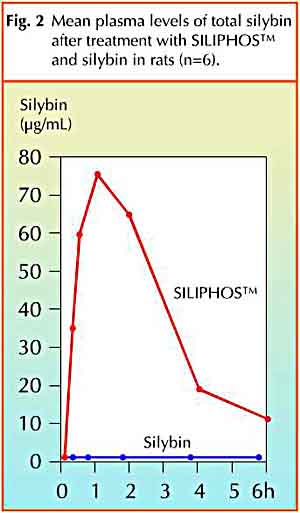 This graph demonstrates the notorious lack of absorption of natural milk thistle extract, especially compared to the active ingredient in Maximum Milk Thistle®. On its own, silybin is barely absorbed at all. Please note, the silybin in this study is pure silybin, the same as is combined with phosphatidylcholine in the Phytosome process to create Maximum Milk Thistle®. Common 80% standardized silyimarin products have absorption as bad, if not worse than, the silybin in this study. The levels here are tracked over a six hour period.

If you are currently taking a common milk thistle product, the blue line indicates how much silybin you are absorbing into your bloodstream (the non-technical term for this is "zilch"). 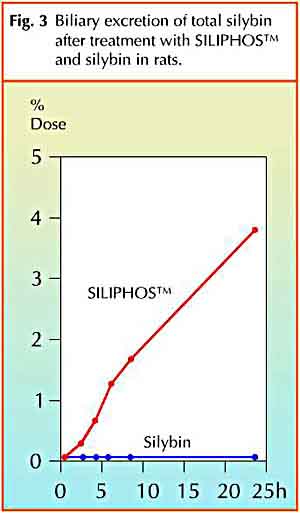 This graph shows the levels of Siliphos compared to silybin as it is excreted by the liver/gall bladder over a 25 hour period. Note that with very little silybin absorbed into the blood to begin with, very little is processed through the liver.

In fact, the biliary excretion of uncomplexed silybin was only 0.001% of the administered dose, whereas is was 3.7% for Siliphos. 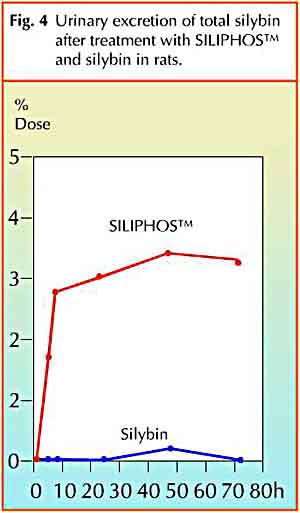 This graph shows urinary excretion of the active ingredient in Maximum Milk Thistle® compared to silybin over an eighty hour period. The highest level of excretion appears to be at about 48 hours for both formulas. The difference in amounts is dramatic, seeing as the same amount of silybin is contained in both formulas and the only difference is the molecular binding to phosphatidylcholine with Siliphos.

In fact, the urinary excretion after administration of uncomplexed silybin was just 0.032% of the administered dose, whereas it was 3.7% for Siliphos. 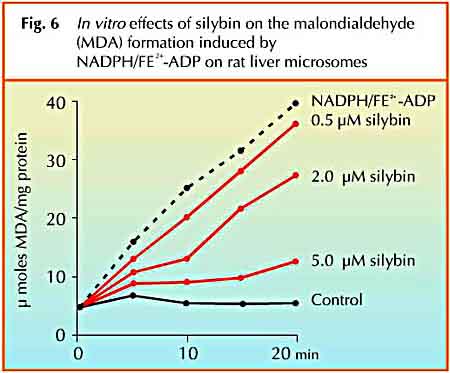 This graph shows the antioxidant effect of silybin against a known agonist, NADPH/FE24-ADP. The more silybin, the less negative results compared to the agonist without interception. 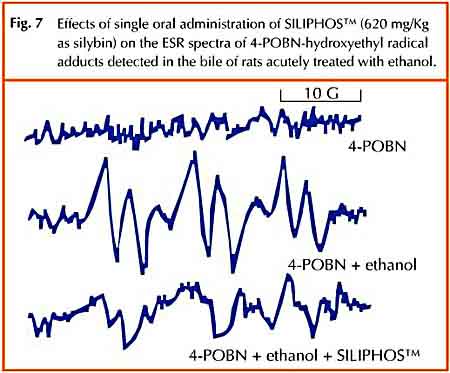 In this graphic example, the additon of Siliphos dramatically moderates the effect of acute alcohol poisoning.

This graph shows the mechanism by which silybin has been clinically shown to stimulate protein synthesis in liver cells. This process leads to the regeneration of healthy liver cells. 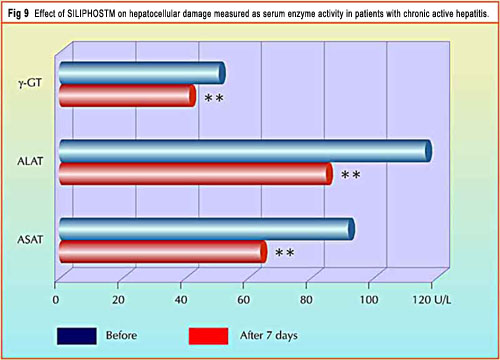 This graph details the beneficial effect of Siliphos from a clinical study on liver enzymes of chronic hepatitis patients after just seven days treatment.

The liver, due to the vital role it plays in metabolism, is particularly exposed to the harmful action of endogenous and exogenous toxic substances. In fact, many potentially harmful molecules (alcohol, drugs, hormones, etc.) are metabolized by the liver and transformed into more hydro-soluble derivatives for subsequent biliary extraction and removal from the body.

This detoxication process is achieved by a variety of enzymes (oxidizing, reducing, hydrolyzing or conjugating) located in the hepatic microsomes, part of the smooth endoplasmic reticulum of the liver cell. For this reason the upkeep of the integrity of the liver cell is necessary for the safeguarding of health. Several biochemical reactions involve as starters or intermediates various free radical species which constitute a continuous risk factor for the integrity of the hepatocytes.1

Therefore, any prevention aimed at reducing potential damage to the liver and any substances contributing to its integrity are certainly of interest. Derivatives of the traditionally used European plant Silybum marianum (L.) Gaertn. (Asteraceae) occupy an eminent position in liver protection.

The name Silybum derives from "sillybon" (tuft, pendant), an ancient Greek word used by Dioscorides (I century A.D.) to indicate a thistle with white spotted leaves.

An old legend tells that these white marks and stripes on the leaves represent the drops of Mary's milk fallen from her breast while she was breastfeeding Jesus during their escape to Egypt.2

Since ancient times S. marianum has been known and used to be recommended as an emetic. During the Middle Ages the plant was probably cultivated in monasteries and used for medicinal purposes: the roots, herb and leaves were recommended for swelling and erysipelas (St. Hildegard from Bingen, 1098-1179) or for the treatment of liver complaints (Lonicerus, John Gerard, Pietro Andrea Mattioli, XVI-XVII centuries).

From 1755 onwards, the specific use of S. marianum fruit for the treatment of liver disease, disorders of the bile duct and spleen was documented.3,4

At present, the standardized extract (silymarin) obtained from the fruit of S. marianum and containing as main constituents silybin, silydianin and silychristin (Fig.1), is widely used in European medicine in the treatment of liver disease.

The main constituent silybin has been subjected to several biochemical and pharmacological studies which have demonstrated its interesting properties but also its poor bioavailability. Complexation with soy phosphatidylcholine gives rise to the lipophilic complex5 (US Patent 4, 764, 508) which substantially improves the bioavailibility of silybin. This results in a marked preventive action as observed in several models of liver intoxication including those with a strong involvement of oxidative stress.2

In this way, the silybin-phosphatidylcholine complex Siliphos®, containing 33% of silybin, endowed with antioxidant activity and, simultaneously, able to prevent cellular derangement by stabilizing the cell membranes and restoring the normal ultrastructure of the hepatocytes, plays a key role in the prevention of liver damage.

As demonstrated by pharmacokinetic studies in comparison with free silybin and silymarin,

Siliphos® represents the most absorbable form of silybin known until now.

The improvement of the oral bioavailability for Siliphos® is mainly dependent on a marked increase of its absorption in the gastrointestinal tract, most likely due to the lipophilic character of the complex. Also in comparison with silymarin, Siliphos® demonstrated a superior bioavailability which, as calculated for cumulative biliary excretion, resulted to be about 10-fold higher than that of the extract.8

Siliphos® shows the same pharmacokinetic profile in man. After oral treatment, the bioavailability in healthy volunteers, in cholecystectomised patients or in patients suffering from hepatic cirrhosis is comparable to that demonstrated in animal models. 2,9,10

After oral intake of Siliphos®, silybin appears rapidly in the bloodstream and is eliminated from the plasma with a relatively short half-life. Silybin is metabolized extensively, most of the drug recovered by the systemic circulation being present as sulphate and/or glucuronide conjugates.

Only a small fraction of the dosage could be recovered in urine indicating that silybin is mostly eliminated by biliary excretion.

Siliphos® is to be considered a natural vehicle of silybin, the active botanical ingredient.

Siliphos® allows silybin to reach the target organ, the liver, in concentrations which are reported to be effective in several models of liver intoxication11,12 (Fig. 5) and to fit with the most important molecular mechanisms observed in vitro, such as the antioxidant13-16 (Fig.6, Fig.7) and the stimulation of protein synthesis in hepatocytes17 (Fig.8).

Pharmacological and toxicological results, added to those found from pharmacokinetic studies, have provided the basis for clinical testing of Siliphos®. Clinical studies, here reported, have been performed to evaluate the properties of this new complex in subjects with "pathological" impairment of liver function.

The results, including the optimal tolerability obtained in these "extreme" clinical situations, give strong support for the use of Siliphos® in those "non pathological" conditions mostly associated with the action of damaging agents on liver cells. Vailati et al.18 performed an open randomized trial on 65 patients suffering from chronic persistent hepatitis. The protective effects of Siliphos® increased with the dose and 240 mg/die p.o. (as silybin) resulted to be the mean therapeutic dose whereas 360 mg/die p.o. (as silybin) was recommended for the treatment of the severe resistant form of hepatitis or during the initial management of the patients.

In a study carried out on 232 patients with alcoholic, acute viral or iatrogen hepatitis, the subjects have been treated with 240 or 360 mg/die p.o. (as silybin) for 120 days. No side effects have been observed and Siliphos®, in comparison with placebo, showed its ability to improve liver condition.19 In a short-term pilot study performed on 20 patients with chronic active hepatitis, the biochemical parameters related to hepatocellular damage and necrosis were significantly reduced after 7 days of treatment with 240 mg/die p.o. (as silybin) 20 (Fig. 9). Finally, a 2-month study on 8 patients complaining of chronic active hepatitis has shown the ability of Siliphos® to reduce serum MDA concentration and to increase galactose elimination by the liver.21